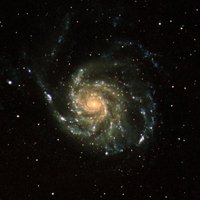 Members of the Structure of the Universe Group (3266) work on a wide range of challenging problems associated with the evolution of galaxies and the formation of stars and solar systems from the early universe to the present time. This includes dark energy that is affecting the large-scale evolution of the universe.  Group members study galaxies at high red shifts, looking back to see active star formation that was occurring billions of years ago. The nuclei of active galaxies are regions of special interest that can be observed using infrared through X-rays as tracers of the unusual conditions there. And in our own galaxy, Scientists in 3266 trace star formation in interstellar clouds by observing atomic and molecular gas.  Group members also study brown dwarf stars near to the sun and Near-Earth Objects within our solar system.

Structure of the Universe: Missions and Projects

The scientific expertise and research activity of the group members include:

This group utilizes a range of ground-based instrumentation, suborbital platforms, and space observatories at optical through submillimeter wavelengths. Facilities employed include NuSTAR for collecting X-ray data, Palomar for optical observations, Spitzer and NEOWISE for infrared observations, and GUSTO (balloon), together with SOFIA (airborne) as well as Planck and Herschel for millimeter, submillimeter, and far-infrared data.  Fundamental physics and precision navigation are part of the science activities of group members, whose activities also include development of new types of detectors and system, ranging from radio receiving systems for the DSN to new submillimeter spectrometers.  Their expertise extends to JPL and beyond through group members serving as Project Scientists on a number of missions, including WISE, NEOWISE, NuSTAR, MicroSCOPE, ACES, and Herschel.  Group members are actively involved in the development of new mission concepts in different categories covering a range of wavelengths and different science goals.