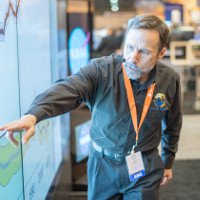 Dr. David Crisp is an atmospheric physicist at the Jet Propulsion Laboratory (JPL), California Institute of Technology. Since receiving his Ph.D. from the Geophysical Fluid Dynamics Program at Princeton University in 1984, his research has focused primarily on the development of instruments and numerical models for analyzing light reflected, emitted, and scattered by atmospheres and surfaces of the Earth and other planets. He has served on the science teams of several missions including the Soviet/French/US VEGA Balloon mission, NASA's Hubble Space Telescope Wide Field/Planetary Camera-2, and Mars Pathfinder missions, and the European Space Agency (ESA) Venus Express mission. He contributed to NASA's technology programs as the Chief Scientist of the New Millennium Program, NASA's space flight technology demonstration program, from 1997 to 2001. He has continued to participate in NASA's space science programs as a member of the Executive Council of the Venus Exploration Analysis Group (VEXAG, 2013-2014) and as the JPL lead for the NASA Nexus for Exoplanet System Science Virtual Planetary Laboratory (NExSS VPL) task.

Dr. Crisp was the Principal Investigator of the Earth System Science Pathfinder (ESSP) Orbiting Carbon Observatory (OCO) mission. This was the first NASA mission designed to measure atmospheric carbon dioxide (CO2) with the sensitivity, accuracy, resolution, and coverage needed to detect and quantify the sources emitting CO2 into the atmosphere and the natural sinks absorbing it at the surface. He is currently serving as the Science Team Leader for NASA's Orbiting Carbon Observatory-2 (OCO-2) and OCO-3 missions and as a member of the Science Team and JPL task lead for the Earth Ventures Geostationary Carbon Cycle Observatory (GeoCarb). In addition to these responsibilities, Dr. Crisp is serving as NASA's representative on the European Commission/ESA CO2 Monitoring Mission Advisory Group (MAG). He is also serving as the Greenhouse Gas Lead for the Committee on Earth Observation Satellites (CEOS) Atmospheric Composition Virtual Constellation (AC-VC).