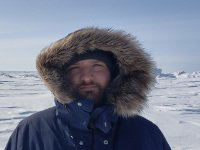 Tom Nordheim is a planetary scientist and roboticist working in the Astrobiology and Ocean Worlds group at JPL. His research focuses on the surface chemistry and habitability of icy moons, with a particular emphasis on Saturn's moon Enceladus and Jupiter's moon Europa. This work is carried out using a combination of remote and in-situ spacecraft data, computer modeling and laboratory experiments. In addition to this, he also works on the development of robots and instrumentation for use in cold and extreme environments on Earth.

He completed his PhD in Space Physics at University College London, where he studied charged particle interactions at unmagnetized planetary bodies using data from the Cassini and Venus Express spacecraft. He has also worked on topics such as cosmic ray interactions with the atmosphere of Venus, electrical phenomena at comets, and has participated in the development of mission concepts for future exploration of Europa and the ice giants Uranus and Neptune. He is a member of the project science team for the Europa Lander mission concept, and is a science team affiliate on the Europa Clipper mission. He was previously a member of the science team for the Cassini Plasma Spectrometer investigation.