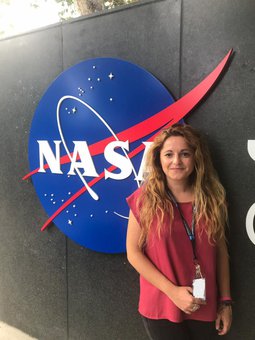 Dr. Anezina Solomonidou is a planetary scientist specializing in planetary geology and investigating the potentially habitable worlds of our solar system. She has obtained her doctoral title on the geology and astrobiology of the Saturnian icy moons from the Paris Observatory in France. From 2014 and for the following 4 years, she worked at NASA's Jet Propulsion Laboratory (JPL) and Caltech in Los Angeles, California, as a postdoctoral researcher on the Cassini mission. Since early 2018 she worked as a research fellow at the European Space Agency (ESA) in Madrid, focusing on the preparation for ESA’s new space mission to the outer solar system, JUICE, and continuing her work on the icy moons of Saturn, and Mars. At the beginning of 2021, she returned to Caltech and JPL to continue her research. Dr. Solomonidou has proposed a series of planetary experiments focused on the exotic environments of the icy satellites of the giant planets, and she has contributed to the design of future missions. She serves as a review panelist for international boards and NASA panels, where she evaluates scientific proposals for planetary research. Finally, she convenes planetary science sessions in international conferences and contributes to several ESA and NASA outreach activities.