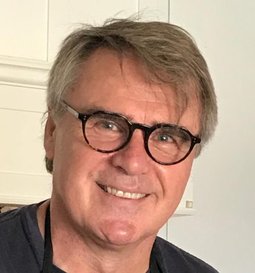 Dr. Simon J. Hook is a senior research scientist in the Science Division at the Jet Propulsion Laboratory. His research is focused on improving our understanding of geologic, hydrodynamic and ecologic processes on planets. He is currently studying large lakes, wildfires and mineral distributions on Earth. He has also applied his knowledge of terrestrial geologic processes to other planets, in particular Mars.

Simon has served in a variety of Project, Program and Line management positions at JPL. These include the Principal Investigator (PI) for ECOSTRESS, HyTES and MASTER, the ASTER Project Scientist, the Discipline Program Manager for Carbon Cycle and Ecosystems, the Engineering and Science Directorate (ESD) Chief Scientist, the Manager for the Earth Science Section and Manager for the Science Division. He is also the Principal Investigator or co-investigator of several NASA ROSES proposals.

Simon’s passion is research and mission development in the optical domain, particularly the thermal infrared, he is an expert on optical radiometry and thermal infrared spectroscopy and member of several instrument teams. The instrument teams include ASTER, MODIS, SNPP, Landsat and AATSR. He has developed validation sites at Lake Tahoe, CA/NV and several other sites in California including Salton Sea, Russel Ranch, and Tonzi Ranch, for determining the absolute radiometry of airborne and spaceborne mid and thermal infrared radiometers and developing surface temperature and emissivity retrieval algorithms. The measurements at the sites are used as an absolute reference standard for multiple instruments developed by both domestic and foreign space agencies. The Lake Tahoe site was established in 1999 and has been operational for over 20 years measuring the surface temperature and other meteorological and radiation variables at 4 locations every few minutes. The Tahoe data are primarily used to calibrate and validate satellite sensors, but are also used to develop surface temperature retrieval algorithms and help understand hydrodynamic and limnological processes.

Simon is the Principal Investigator for the ECOsystem Spaceborne Thermal Radiometer Experiment on Space Station (ECOSTRESS). Simon led the original proposal for ECOSTRESS which was selected in 2014. He then led then development which culminated with the launch of ECOSTRESS to the International Space Station in 2018. He continues to lead the ECOSTRESS team today which is now focused on analyzing the data. ECOSTRESS provides detailed temperature and emissivity measurements of the surface of the Earth, and scientists use that information for a variety of studies, in particular, how ecosystems use water through a process called evapotranspiration (ET). The ET information is used to calculate how much water crops use to maximize the food yield or crop per drop. ECOSTRESS derives the surface temperature at resolutions of about the size of a football field, these are the highest resolution surface temperature data publicly available and allow farmers to maximize crop water use within a field. ECOSTRESS data can be used to study many other processes such as urban heating and its mitigation and monitoring volcanic activity with many more uses described on the ECOSTRESS website.

ECOSTRESS was originally planned as a 1-year mission but has been extended to at least 2023 as it continues to deliver critical detailed thermal information over the land and oceans. The results from ECOSTRESS have highlighted the need for frequent high resolution multispectral thermal infrared data and led, in part, to the undertaking of three new missions: TRISHNA, SBG and LSTM. TRISHNA is a French-Indian collaboration planned for launch in 2025. SBG is a US led activity with the thermal element jointly developed by the Italian Space Agency (ASI) and NASA, planned for launch in 2027. LSTM is led by the European Space Agency with a launch planned for 2029. This international effort will provide the first ever, freely available, daily detailed temperature maps of the land and oceans for science and societal benefit. SBG is one of the fundamental earth system observables recommended by the US National Academy in their recent Earth Science Decadal Survey. Simon is working with all 3 teams to coordinate their activities to maximize the usefulness of the data for science and society.

A key aspect of Simon's research is the development of new techniques to analyze and extract critical information from optical remotely sensed data, in particular, temperature and emissivity. Techniques developed by Simon are widely used by researchers and have been incorporated into commercial packages and form the basis for the standard temperature and emissivity products from ASTER, MODIS, ECOSTRESS, Landsat and several other instruments.

Simon has held multiple leadership positions at JPL, most recently as the Division Manager (DM) for the Science Division and ESD Chief Scientist (CS). As DM, he focused on increasing the transparency of Division processes, developing employees and expanding the business base for the Division. Examples include providing written expectations for all research levels and providing clear processes, metrics and pathways for scientists to be recognized and develop their careers. During his 7-year tenure, the business base for the Division increased by 30% and several new missions, led by scientists in the Division, were selected.

As ESD CS, he developed several scientific strategic initiatives (SI’s). These initiatives typically fund scientists to carry out research focused on a particular mission. Simon modified the approach to combine the initiative with a related activity designed to develop the research community. The activities were cross divisional and cross directorate. For example, a recently selected Data Science SI has focused activities in Astrophysics, Earth and Planetary coupled with JPL research community activities including lectures, hackathons and short courses in Data Science. This combination of activities, are designed to elevate the knowledge of the broader community compared to just those individuals working the SI. This approach ensures the research is useful for many scientists and the techniques developed in the focused studies, can be readily applied to other research problems