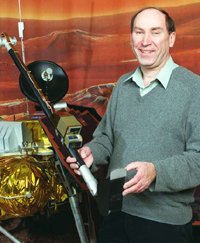 Currently, Dr. Richard Zurek serves as the Chief Scientist for the Mars Program Office at JPL and continues as the Project Scientist for the Mars Reconnaissance Orbiter. Launched in 2005, MRO continues its exploration of the atmosphere, surface and subsurface of Mars as part of its second Extended Science Mission. As a researcher, Dr. Zurek has studied the upper atmosphere of the Earth and the atmosphere of Mars, using observational data acquired by spacecraft such as the Upper Atmosphere Research Satellite (UARS), Mariner 9, the Viking Orbiters and Landers and the current Mars operating missions.

Dr. Zurek graduated from Michigan State University with a B. Sc. degree in Mathematics in 1969, and he later received his Ph.D. in Atmospheric Sciences from the University of Washington (Seattle) in 1974. Following one-year post-doctoral appointments in research at the National Center for Atmospheric Research (NCAR) and at the Laboratory for Atmospheric and Space Physics (LASP), University of Colorado in Boulder, Colorado, he went to work at JPL where he has been employed since 1976.

Dr. Zurek's primary research activities for Earth focus on the seasonal and interannual variability of the stratosphere. His primary research for Mars includes the study of atmospheric thermal structure, the dynamical circulation, radiative-dynamical interactions involving airborne dust, and the transports of dust and water vapor. Of special interest are the causes and effects of the great dust storms that occur episodically on Mars.