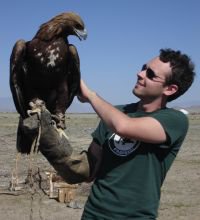 Dr. Matt Siegler grew up in the small town of Wayne, Illinois. Starting with a love for magnets on Brio trains, he developed a deep interest in all sorts of science, fostered by a supportive family and lots of documentaries. This lead to an odd double major in Physics and Film at Cornell University. After graduation, he spent a year working at CERN, then moved to California to study ice on the Moon, Mars, and Mercury. He completed graduate school with David Paige at UCLA in 2011. He currently works on the Diviner Lunar Radiometer on the Lunar Reconnaissance Orbiter, thermal and ice stability modeling of the inner solar system, and on the upcoming InSight geophysical mission to Mars. He and his wife, Rita, also just welcomed their first child, Jackson, to this planet in August 2013.

Dr. Siegler is a weekend museum guide at the Griffith Observatory as well as other work with public science education, including work on PHDtv and the upcoming Cosmos sequel.