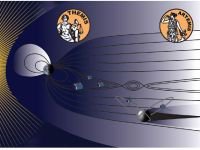 ARTEMIS stands for "Acceleration, Reconnection, Turbulence and Electrodynamics of the Moon's Interaction with the Sun".