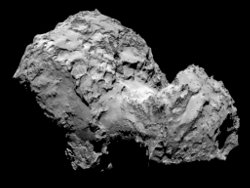 The Small Bodies group is composed of several research teams with interrelated interests and goals focused on the small and primitive bodies of the solar system. Its members span the disciplines of planetary sciences, with areas of expertise ranging from observational planetary astronomy, planetary geology, data analysis and interpretation, theoretical modeling, and mission leadership and support.

Over the past decade the research areas led by the group include modeling the morphology of cometary jets; detection of volatile transport on Triton and Pluto; physical characterization of asteroids and cometary nuclei; physical characterization of extinct comets, asteroids, Kuiper Belt Objects, and Centaurs; formation and composition of the low-albedo side of Iapetus; the dynamics and physical properties of planetary rings; the search for Near-Earth Objects, including Potentially hazardous Objects, and the nature of Martian surface material. One of the world's leading planetary radar science teams is contained in the group.  The group also provides scientific leadership for flight projects and for NASA. Members are also actively involved in outreach and education.