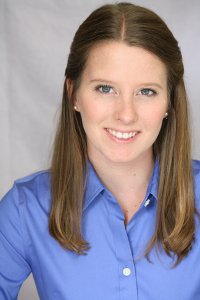 Dr. Morgan Cable is a research scientist and group supervisor in the Astrobiology and Oceans Worlds Group at the NASA Jet Propulsion Laboratory in Pasadena, California.  She worked on the Cassini Mission as a Project Science Systems Engineer, and is currently working on the Europa Clipper Mission, which will visit the ocean world Europa around Jupiter.

Morgan’s research focuses on organic and biomarker detection strategies, through both in situ and remote sensing techniques.  While earning her Ph.D. in Chemistry at the California Institute of Technology, she designed receptor sites for the detection of bacterial spores, the toughest form of life.  As a NASA Postdoctoral Fellow at JPL, Morgan developed novel protocols to analyze organics such as amines and fatty acids using small, portable microfluidic sensors.  She is currently working as a Collaborator on the Mapping Imaging Spectrometer for Europa (MISE), an instrument selected for NASA’s next mission to Jupiter’s icy moon Europa; this spectrometer will map Europa’s surface and search for organics, salts and minerals.

Dr. Cable’s research interests also include ‘weird’ life and prebiotic chemistry.  She has performed laboratory experiments to study the liquid hydrocarbon lakes of Titan, a moon of Saturn.  She and colleagues were the first to discover a co-crystal, the equivalent of a ‘hydrated mineral’, made exclusively of organics that may exist on Titan’s surface.  This work has led to the inception of a new field, Titan ‘petrology’. This work could yield clues to organic reservoirs on Titan that life could potentially exploit.

In addition to biomarker sensor design and the search for ‘weird’ life, Morgan has also explored several extreme environments on Earth that serve as analogs for other places in the solar system, such as Mars.  She was involved in research expeditions to the driest desert in the world, the Atacama Desert in Chile, and to the summit of Mt. Kilimanjaro in Tanzania.  Morgan has also co-led a team of young researchers on multiple expeditions to Iceland to study how life colonizes a fresh lava field.  The goal of this work is to inform future Mars sample return missions in terms of sample selection, preservation and analysis.