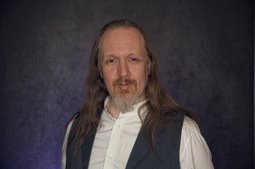 Karl Mitchell is a planetary scientist, mission formulator and educator.

He moved JPL from the UK in 2005 to join the Cassini-Huygens project, both on the Cassini RADAR team and later as a science planner. He has worked on a wide variety of science and engineering projects, publishing over 60 peer-reviewed papers and winning 16 NASA grants (4 as PI), featuring targets as diverse as Titan, Mars, Venus, Io, Enceladus, Triton and Earth. Karl's scientific work focuses primarily on the use of observation-informed models to understand active geological fluid processes on other worlds and their implications for workings and habitability. This has led to research has mostly focused on studying planetary surfaces and near-surface environments, particular volcanology, hydrology and applied remote sensing. He is also actively engaged in technical and scientific development and field testing of related novel technologies, especially those relating to caves and vents.

From 2017-2021, Karl’s main focus was on Trident, a mission to Neptune’s exotic moon Triton. He was the initial concept champion, leading the early science development, and then served as Project Scientist, leading the science implementation effort. The mission was down-selected for Phase A studies, but not ultimately selected despite excellent evaluations. He continues to be actively engaged in formulation of mission concepts for Ice Giant systems and ocean worlds.

Since 2021, Karl has served as Program Manager for Planetary Science Research & Analysis, helping JPL proposers win NASA ROSES grants, and overseeing active proposals, guiding a team of six Discipline Program Managers. This benefits from a long-term interest in the use of the scientific method in the devising of hypothesis-based approach to both R&A and mission proposals.

Karl is an engaged and enthusiastic mentor and educator, specializing in training early career scientists and engineers to work together within actual and simulated mission development environments. A major outlet for this is in his role as lead science mentor for the annual NASA Planetary Science Summer School, but more recently he has also been training new science mentors under the broader NASA Science Mission Design Schools umbrella.

In his spare time, Karl enjoys roadtrips to the national and state parks of the US southwest, climbing through caves, various music-related activities, and going to elaborate costumed balls.