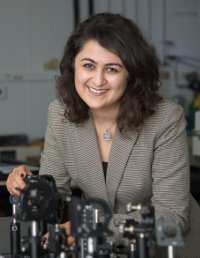 Dr. Sona Hosseini is a planetary scientist and an instrument developer who has led many research and instrumentation projects working closely with scientists and engineers from different disciplines. She has mentored over 50 students in astronomy studies and instrument development. Hosseini’s interest in astronomy was initiated when she was seven years old on a school field trip to NASA Houston Center. She built her first telescope in Junior High and moved on to building amateur dark room cameras, and grating spectrometers. Her passion led her to actively get involved in amateur astronomy projects and work with university professors and astronomy graduate students on various cosmology and astronomy projects. Her apparatuses and measurements from the central and western sites in Iran during her B.S. and M.S. pioneered sky brightness measurements for Iran National observatory sites in which her report was used and cited in more than 16 countries. During her Ph.D. program in the U.S., she developed the theoretical architecture of the reflective Spatial Heterodyne Spectrometers (SHS) and lived on Mt. Hamilton, 2010-2014 to construct and develop a reflective Spatial Heterodyne Spectrometer (SHS) coupled to a Cassegrain telescope to faint extended astronomical targets such as comets. Since joining JPL, Hosseini has led numerous studies to simulate and study low-density gas environments in our solar system and conceptualized innovative technology to enable such measurements in future NASA missions. These concepts include missions to study the Martian atmosphere, cometary coma, planetary exospheres, planetary atmospheric tails and aurora, galaxy structures, and interplanetary and interstellar matter. Dr. Hosseini uses creativity and innovation to address critical issues and exercises discretion and independent judgment in evaluating potential approaches and solutions to critical problems and determining appropriate resolutions. In her science and instrument development activities, she leads groups of 30+ people across science, engineering and software development and frequently interacts with partners and other NASA centers and makes decisions as to policies, procedures, and practices in her leadership role. In parallel to her JPL duties, Hosseini is active in outreach events and gives regular presentations to students in schools and her local community clubs.