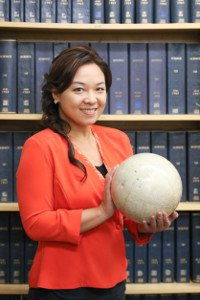 Dr. Cecilia Leung is a planetary scientist specializing in the present-day water cycle on Mars. Her research focuses on the atmospheric structure and dynamics of water, dust, and winds in the planetary boundary layer and in the lower atmosphere. Unlike the Earth, a significant percentage of Mars’ polar ice cap sublimates into water vapor every year, which gets carried by winds and deposited in other regions of the planet forming interesting clouds and surface features before circulating back to the poles and becomes incorporated into the polar ice caps once again. Dr. Leung’s research combines the use 3D numerical atmospheric models (global circulation models and mesoscale atmospheric models) and spacecraft data to study the global and regional atmospheric circulation of water, subsurface-atmospheric exchange processes, as well as coupling between the water and dust cycles. While earning her PhD from the Lunar and Planetary Lab at the University of Arizona, she worked on water-ice fogs in Valles Marieris, and modeling atmospheric influences on the formation of Recurring Slope Lineae. She also simulated regional dust storms in support of the Entry-Descent-and-Landing (EDL) of the InSight Mars Lander.

Cecilia Leung is currently a NASA Postdoctoral Program fellow at JPL, collaborating with Dr. Leslie Tamppari and the Mars Climate Sounder team to understand the vertical distribution water vapor above the Phoenix Mars Lander and the Curiosity Rover landing sites.