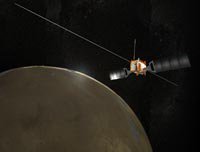 MARSIS (Mars Advanced Radar for Subsurface and Ionosphere Sounding) is a subsurface radar sounder with a 40-meter (130-foot) antenna on the Mars Express orbiter that is searching for water and study the atmosphere. MARSIS is a low frequency, nadir-looking pulse limited radar sounder and altimeter with ground penetration capabilities, which uses synthetic aperture techniques and a secondary receiving antenna to isolate subsurface reflections.

The main objective of MARSIS is to look for water from the martian surface down to about 5 kilometers (3 miles) below. It can characterize the surface elevation, roughness, and radar reflectivity of the planet and study the interaction of the atmosphere and solar wind in the red planet's ionosphere. During the lifetime of the mission, the instrument will be able to conduct ground-penetrating studies over the entire planet.

The technique used by this radar instrument has been used before on Earth. Similar instruments have been flown on low-flying aircraft to probe deep into the ice sheets of Antarctica and Greenland. At Mars, the instrument with its long antenna flies over the planet, bouncing radio waves over a selected area and then receiving and analyzing the "echoes." Any near-surface liquid water sends a strong signal, while ice is more difficult to detect since its electrical radar signal would be about the same as rock. The echoes help characterize the materials and roughness of the surface.