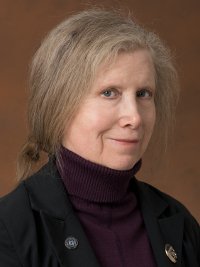 Dr. Bonnie J. Buratti is a JPL Fellow and Senior Research Scientist. She is currently serving as the Deputy Project Scientist for the Europa Clipper mission. She has held numerous leadership positions on flight projects, including the NASA Project Scientist for Rosetta, as well as line management positions at JPL. Her main research areas are volatile transport in the outer Solar System and utilizing photometric theory to understand the physical properties and evolution of planetary and satellite surfaces. Using synergistic data sets of both ground-based and spacecraft data, she led a team that tracked seasonal frost transport on Triton and Pluto. She also led a Cassini team that discovered CO2 on Iapetus (Buratti et al. 2005), and another large Cassini team that combined the results from 6 instruments to understand the relationship between the rings and small inner moons of Saturn. (Buratti et al., 2019) Her current new interest is to use Palomar’s adaptive optics system to study changes on the ice giants, Neptune and Uranus, and their moons, in preparation for the Planetary Decadal’s next flagship mission to the outer Solar System

Among the projects she has been involved in are Deep Space 1 (co-I), Clementine (co-I), Moon Multispectral Mapper on Chandrayaan-1 (co-I), Dawn at Vesta (participating scientist), New Horizons (co-I), and Cassini (VIMS Team and Investigation Scientist). She has authored 263 peer-reviewed papers, 52 first author, with an h score of 62 (data from the NASA Astrophysics Data System). In addition, she authored a popular book “Worlds Fantastic, Worlds Familiar” (Cambridge) that offers a tour of the discoveries in the Solar System from the viewpoint of a scientist in the field.

Dr. Buratti has held leadership roles in the scientific community. She served as the Chair of the Small Bodies Assessment Group (2019-2022), as Chair of the Division of Planetary Sciences of the American Astronomical Society (2014-2015), and as Secretary of the Planetary Sciences Section of the American Geophysical Union (AGU). She served on COMPLEX, and she was on the editorial board of Icarus and Reviews of Geophysics. She is currently on the Senior Research Scientist Council.

Dr. Buratti also has a passionate commitment to outreach and mentoring. She was awarded the Carl Sagan Medal for Excellence in Public Communication in Planetary Science. Her educators’ workshop “Teachers Touch the Sky”, a one-week hands-on workshop at JPL for teachers in grades 4-8, was conducted at JPL for 20 years, reaching over 300 teachers and 80,000 students, 90 % of whom came from underrepresented groups.

She has received numerous honors for her scientific research, service, and outreach. She is an elected Fellow of the AGU. She was awarded the NASA Exceptional Achievement and Exceptional Public Service Medals, the JPL People Leadership Award, and the Magellan Award. She is a Lew Allen awardee, and received over two dozen NASA Group Achievement awards.

Dr. Buratti is also engaged in mentoring of other scientists, especially early career ones from underrepresented groups. She advises her colleagues on how to maintain a research career while engaged in project or management work. She facilitates mentor programs for postdoc advisors, and she served as a mentor for the AGU College of Fellows.