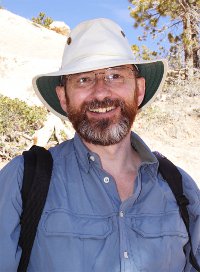 Dr. Davies is a Principal Scientist at the Jet Propulsion Laboratory, California Institute of Technology. A geologist and planetary scientist specialising in volcanology, he is an expert in the acquisition, interpretation and modelling (both analytically and numerically) of remote sensing data of volcanic eruption processes, especially on Io (the hyperactive volcanic moon of Jupiter) and at terrestrial analogues of Io’s volcanoes. These investigations have taken Dr. Davies to ongoing volcanic eruptions at the ends of the Earth. His work has led to methodologies for interpreting remote sensing infrared data to identify and quantify the volcanic eruption processes taking place, leading to innovative instrument designs for studying volcanic activity.

Dr. Davies was a member of the Galileo Near Infrared Mapping Spectrometer (NIMS) team and continues to quantitatively analyse the unique NIMS Io dataset. He is a Co-Investigator on the Mapping Imaging Spectrometer for Europa (MISE) instrument on NASA’s new Europa Clipper mission, and is a Co-Investigator on the Io Volcano Observer, a finalist in the NASA Discovery 2019 competition. He has authored or co-authored over 100 refereed papers on modelling and understanding volcanic eruptions on Earth, Io, and elsewhere in the Solar System and is the author of “Volcanism on Io”, published by Cambridge University Press. He was the Science Lead on the successful Autonomous Sciencecraft Experiment that flew on Earth Observing-1; is the Lead Scientist on the JPL Volcano Sensor Web project; and is an associate member of the Terra ASTER Team. He is the manager of the ASTER Volcano Archive, which is based at JPL.

His terrestrial studies provide understanding of distant Io’s eruptions, planetary heat flow, and role within the orbital resonance that ultimately drives Io’s volcanic activity; and the study of Io similarly reveals insights into volcanic eruption processes that helped shape the surface of Earth, the Moon, and the other terrestrial planets in their distant pasts, as they are actively reshaping Io today.