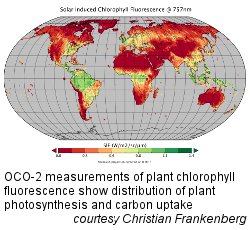 The Carbon and Ecosystems group studies the role of ecosystems and the carbon cycle within the Earth System.  Research in the group focuses on carbon cycle-climate interactions, impacts of climate on ecosystem structure, function, and composition, as well as on disturbance processes, such as wildfire.  Members of the group study tropical drought effects, warming and changes in permafrost regions, land use change, effects of ocean climate variability on marine biology and biogeochemistry, terrestrial-marine interactions in the coastal zone, greenhouse gas emissions from cities and energy systems and the consequences of functional diversity for ecosystems on land and in the sea.

The group includes expertise in satellite and airborne instruments and observations, prognostic and assimilation modeling, in situ measurements and calibration/validation and draws on expertise in terrestrial, marine, atmospheric and urban/energy systems. The group has several foci:

Sensor, measurement, and technology development.  The group has expertise in radiometry, fluorescence, spectroscopy, RADAR and LIDAR techniques, as well as novel in situ and airborne approaches and develops and proposes new sensors and measurements in support of the scientific community and NASA’s priorities.