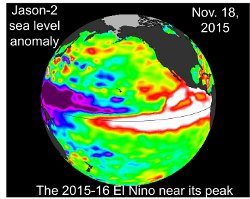 The “Ocean Circulation and Air-Sea Interaction” group focuses on research related to ocean circulation and its linkages to the climate and the water cycle.  The group provides broad support to NASA for ocean-related satellite missions as well as the development of future mission concepts.

The over-arching science questions the group addresses are:

Members of the group support various ocean-related satellite missions including the following:

The scientific expertise & activities of the group members includes: