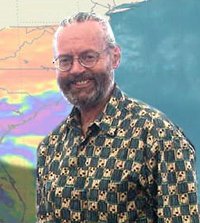 Bjorn Lambrigtsen is a scientist who specializes in microwave observations of the Earth's atmosphere. His research activities ranges from the development of new technology and observational systems to the study of hurricanes. Since 1991 he has been the Microwave Instrument Scientist for the Atmospheric Infrared Sounder carried on NASA's Aqua satellite. He is also a member of the science team for NASA's upcoming NPOESS Preparatory Project satellite mission - a pathfinder for the nation's next generation of weather satellites. He led the development of a new aircraft-based microwave sounder, HAMSR, which is used in NASA field campaigns to study hurricanes. Finally, he is leading the development of GeoSTAR, a new concept for a microwave sounder for geostationary satellites.