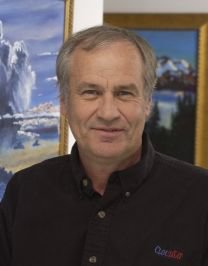 Director of the Center for Climate Sciences

Dr. Graeme Stephens received his Ph.D. in 1977 from the University of Melbourne. He was appointed to the CSIRO Division of Atmospheric Research in 1977 as a research scientist and promoted to senior research scientist in 1982. Dr Stephens joined the faculty of the Department of Atmospheric Science, Colorado State University as an associate professor in 1984 and was promoted to full professor in 1991 and subsequently to the rank of University Distinguished Professor in 2005. Professor Stephens has made major research contributions in three related areas; atmospheric radiative transfer, remote sensing and to the topic of cloud climate feedbacks. He has published over 250 peer reviewed publications, a text book on remote sensing, has a citation count of over 25000 and a H-index of 75 (2017). He has served as principal investigator the NASA CloudSat mission that has pioneered Earth observations of clouds and precipitation and currently serves as co-Chair of the Scientific Steering Group (SSG) for the Global Energy and Water Exchanges (GEWEX) project of the World Climate Research Programme (WCRP). Professor Stephens has received a number of awards in recognition of these contributions. Most recently he was elected as member of the U.S. National Academy of Engineering in 2016, elected as Fellow of the Royal Society in 2018, recipient of the Royal Meteorological Society's Mason Gold medal in 2018 and the IAMAS International Radiation Commission Gold Medal for career contributions to radiation sciences in 2008. Professor Stephens is also the recipient of the American Meteorological Society's Houghton and Jule Charney Awards and is Fellow of the American Meteorological Society, the American Geophysical Union, and American Association for the Advancement of Science. He also received the CSU Halliburton New Faculty Research Award, the CSU Abel Outstanding Faculty Research Award and was the Jule Charney Lecturer at AGU, fall 2011. Professor Stephens also received the Exceptional Public Service Medal, and multiple NASA Group Achievement Awards.